One Treasure at a Time

If you’re reading this post, then it’s likely that you’ve attended an annual Higher Education Web Professionals Conference (or 10). At the very least, you’ve almost certainly seen a colleague tweet once (or 100) times about HighEdWeb. If this is true, you’d undoubtedly be shocked, just shocked, to learn the nerd culture is strong with this group. Just kidding, of course you’re not! Like, do you even #HEWeb, bro?

Being the data-driven geeks we are at Campus Sonar, before attending our first HighEdWeb as sponsor, we wanted to apply our social listening expertise, test our assumptions about the HighEdWeb culture, and analyze the online conversation around HighEdWeb 2017. Exciting, right? This sort of analysis is exactly my kind of jam and as luck would have it, the project was assigned to yours truly. Green as I am to the world of HighEdWeb, I set out like Frodo, packed all eight of my meals for the day, and prepared to explore uncharted territory.

The ultimate goal is to reveal the hearts and minds of HighEdWeb 2017 participants, but as the philosophically inclined would say, “it's not the destination that matters, it's the journey.” Many analytical treasures were discovered along the way—I invite you all to take a deep dive with me into the ultra-cool, mega-nerdy, HighEdWeb 17 online conversation. Hold on to your pocket protectors, fellow nerds—it’s gonna be a ride.

Like so many social listening journeys before this one, I began with a query and a word cloud. Particularly this word cloud:

The query pulled in all the chatter and web content surrounding the conference while the word cloud served as my starting off point for analysis—visually representing the nearly 10,000 online mentions captured from the HighEdWeb Conference held last year, in October 2017. It might surprise your Luddite grandmother that #HEWEB17 is the biggest word in the cloud. Naturally, that’s about as useful as a pre-peeled banana in a plastic wrapper. Lucky for everyone reading this blog post, #shepersisted.

Digging in just a little bit further, you’ll notice strange hashtags about menswear—#tie11 and #tie8, for example. Side bar—me at this stage of the journey: “why are you people already talking about #HEWEB18? It’s a professional conference, not a concert.” Oh, how little did I know … ANYWAY, back to menswear. Yeah, that’s not menswear. Rather, those hashtags refer to specific conference tracks and the corresponding session number. Ten manually written rules segmenting each track and their 12-ish sessions later (phew!), and papa’s got a brand new analysis bag. Now I can more readily identify the most popular tracks, the demographics of the attendees of those tracks, and other cool hidden treasures. About 40% of the conversation surrounded conference sessions—take a look at the volume of conversation by track:

Discovering the HighEdWeb Community Beyond the Conference

Intriguing, yes, but WAIT, there’s more! I can use those same rules to filter out all that menswear and really bring into focus other themes and trends among the remaining 60% of the mentions. I identified and segmented six topics: Professional Encouragement, Passion, Food (yes, my Hobbits—food!), Social Networking, Travel, and Reflections (HighEdWeb2018, anyone?). With certain topics and trends popping out in my newly filtered word cloud, I began to play with rules to capture the essence of each topic. The secret sauce consists of three ingredients:

After writing six rules to segment the aforementioned themes, I can take the opportunity to dive into each of the themes’ conversation to get an even deeper understanding of what this community is about. Check out some of my favorite visual representations:

This Hobbit is hungry; did someone say dinner (Food)?

So far, I can provide a breakdown of the conversation by conference track, the themes that resonated within the tracks, and demographics of attendees as a whole—and by track. The ladies <3 the Poster Sessions and Lightening Talks, while the dudes are all about the Development Programming and Architecture—yeah, that’s not cliché at all, right? Worry not fellow readers, HighEdWeb redeems itself with a 50/50 gender split on the Management and Professional Development track.  Useless trivia about what resonated with which gender aside—I’ve nonetheless elicited a truly powerful understanding of what makes the HighEdWeb community tick (my AMA Reddit thread on the psyche of said community is TBA). Treasures abound! Billy Mays would be so proud because yes, folks, there’s more.

At this phase in my analysis journey, I’ve covered enough ground to explore the hidden conversation. The silent mentions, or hidden conversation, are those mentions that don’t include a conference hashtag or relevant account. Analysis revealed 3% of the conversation was hidden. Most of the silent mentions were track-based (80% of the silent mentions)—the majority of which were from the Marketing and Content Strategy track and use #hesm. Insight elicited? This could indicate their desire to share what they learned with the greater higher ed social media community. This information was easily uncovered due to previous analysis and segmentation—order of analysis operations hard at work here.

You're present on social, but are you listening to your audience? Here's why this is so crucial for higher ed. #HESM https://t.co/C5cX50mAMl

You may have noticed I’ve since reached the final goal—with hearts and minds of the HighEdWeb community unearthed. Nevertheless, curiosity pushed me to uncover one last treasure.

Winding the Journey Down with a Treasure to Ramp You Up

It was easy enough to notice the same names reappear throughout conference tracks. After staring at track conversation for hours, I was smart enough to realize that many or most of those folks were presenters at the conference. I wondered then, what were the popular tracks for the attendees? What about the six themes identified beyond the tracks? What if I filtered out what I assumed to be a huge chunk of the conversation belonging to the presenters themselves and looked at just the attendees? So, of course, I did just that.

Perhaps it’s no surprise that a professional conference attracts like-minded people, but here we have data that suggests these thought leaders truly are influencing the direction of the conversation—down to the same percentages, both at the track and community-based themes level. This information should either excite or terrify all of you thought leaders out there. You’re welcome. 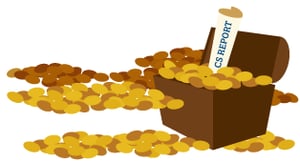